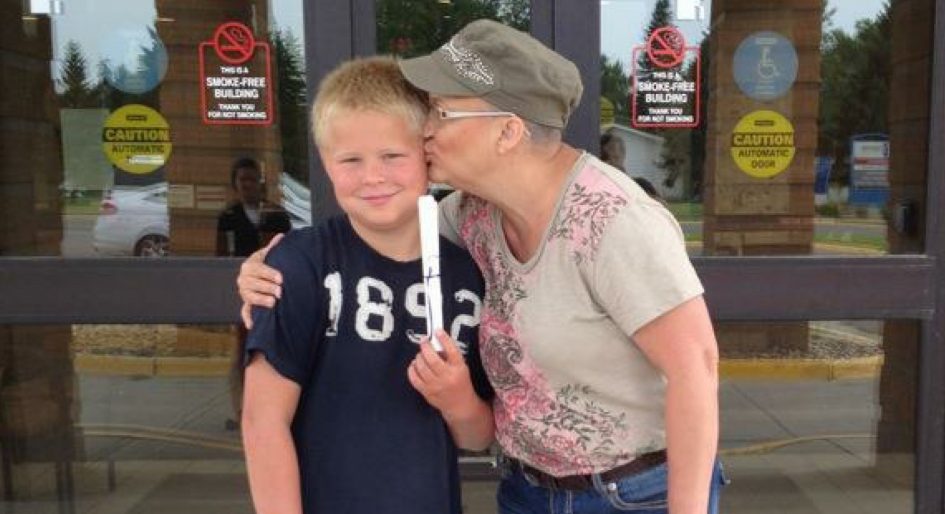 You can typically find Monte Albrecht tackling opponents on the football field or going for the pin on the wrestling mat, but seven years ago he had to tackle a much different scenario – his mother’s battle with breast cancer.

It was a Sunday morning and the family was having breakfast before headed to church. Monte, a 5th grader at the time, can recall his parents acting a little different and thinking he was in trouble. Instead, he was going to hear the news that would change his life – his mother, Tammy, had been diagnosed with breast cancer.

“It was hard to wrap my head around it,” said Monte. “I remember my sisters tearing up and I was broke up too when they told us.” Tammy’s sister had also fought cancer, so the kids were familiar with the disease.

As Tammy embarked on her chemotherapy treatments, the family received a lot of support from their family and friends. “My oldest sister is a nurse, so she spent a lot of time helping her out,” said Monte. “There were a lot of people who drove her back and forth to appointments and treatments.”

During Tammy’s two year battle, there were ups and downs for the family. At times, the chemo would make her fatigued and would rather lay low. “My dad stayed calm and was supportive during everything,” said Monte. “We always knew he was going to take care of her if she was having a bad day.” Things also changed around the house, as Tammy was able to be less involved with chores and activities. “I learned I’m not very good at folding clothes,” laughed Monte.

One of the benefits of being from a small community is the support you receive in times of trouble and this was no exception for the Albrecht family. “I always felt well supported at school and like I could talk to people. Everyone was always asking how she was and the teachers were real supportive with homework and class. A lot of people would bring dinners, which was really nice, the neighbors would offer to give me rides, and we got a lot of my grandma’s caramel rolls.”

It was a joyous day for the family and the community, when Tammy was declared cancer-free. “She took a picture outside when she was leaving the hospital and just said ‘I’m done with this’,” said Monte. “They also had a celebration and parade at school, which was neat.”

Today, Monte is in his senior year at De Smet High School and Tammy is back to teaching 4th grade at De Smet Elementary School. “I don’t think I’d be able to get through high school or college without hearing her voice. I can call her on a bad day and she can always talk me through it and calm me down.”

“She is the strongest woman I know,” said Monte. “She would go out of her way for anyone and she always tells me ‘it’s not always what they can do for you, it’s what you can do for them’.”

As the De Smet High School students join together to raise money and awareness through “Bulldogs Bark Back @ Cancer”, Monte is just one of the many students who has experienced the wrath of cancer first hand and understands the importance of coming together as a community to support those fighting this disease. Monte has chosen to step up and share his story and give advice to others who may be going through the same battle. “Don’t be afraid to ask for help."