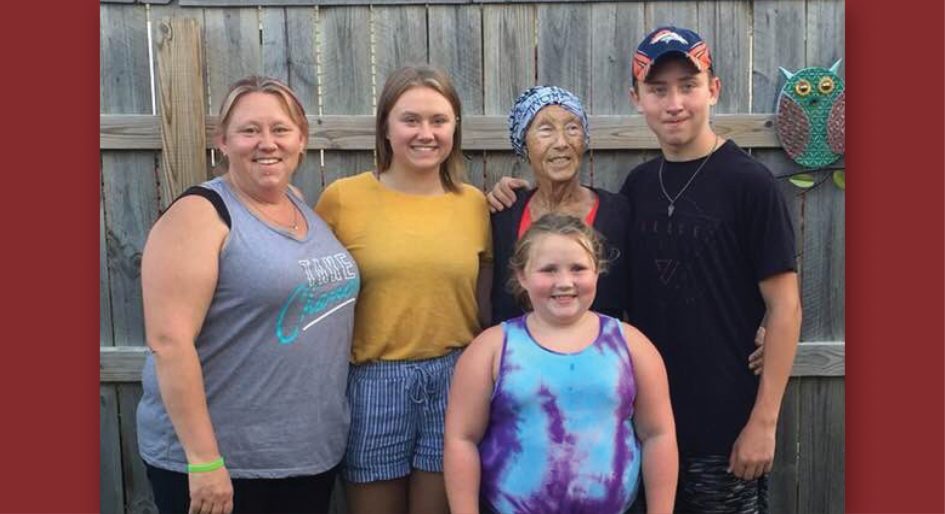 Mary Farrell was exactly that kind of grandmother and will have a forever bond with granddaughter, Kearra Elkins, a Senior at De Smet High School. Growing up, many of Kearra’s most cherished memories involve time spent with her grandmother. Mary was a crafty lady, so she especially enjoyed sewing and working on their various craft projects together. They also worked together as waitresses at the Oxbow Restaurant and would go out to eat breakfast together on Sundays.

In September 2017, Mary was diagnosed with lung cancer. She hadn’t been feeling well and had a cough and difficulty breathing. Thinking she had bronchitis, Mary went to the specialist, only to find out it was much more serious – she had cancer.

Soon after her diagnosis, Mary started chemotherapy and would go for treatment every three weeks for three days, doing treatment one hour per day. After three to four months, she was able to do treatment a little closer to home in Brookings. If Kearra’s mom and aunt were unable to drive her to her appointments or treatment, Kearra would do so. “It was hard to be there for treatment and see her going through this,” said Kearra. “She was a runner and was always so busy. It opened my eyes to see that this can happen to anyone.”

Trying to make the best of the situation, Kearra admires how her grandmother kept a strong, positive attitude. “She was a fighter and she wasn’t going to give up easily. She even wanted to try new things when she was sick.”

Throughout their family’s battle, the De Smet community provided support and generosity during a difficult time. “The Country Club owners (where Mary had previously worked) would bring us food and people would pay our bill while we were eating at the Oxbow,” said Kearra. “You don’t realize how much your community is there for you until something like this happens.”

As the cancer wore on, Kearra could begin to see her beloved grandmother slipping away. “She couldn’t leave the house anymore, she was so weak. I thought I was ready to let go, but you’re just never prepared to say good-bye to someone who meant so much.”

In November 2018, Mary passed away at the age of 69, after a hard-fought battle with cancer. “Even though it had been a year and two months since her diagnosis, it did not seem that long or like I had enough time with her,” said Kearra. “I still find it hard to go to Brookings to this day; it reminds me of taking her to treatment.”

Mary’s memory continues to live on through her family and friends, especially her granddaughter. No stranger to heartache herself, Kearra has been through her share of sadness. At eight years old, she lost her father to an accident, and they have had other family members diagnosed with cancer as well. “I would recommend to others to spend every minute you can with those you love, especially when they’re going through an illness,” said Kearra.

As the De Smet High School students join together to raise money and awareness through “Bulldogs Bark Back @ Cancer”, Kearra is just one of the many students who has experienced the wrath of cancer first hand and understands the importance of coming together as a community to support those fighting this disease. Kearra has chosen to step up and share her story and give advice to others who may be going through the same battle.