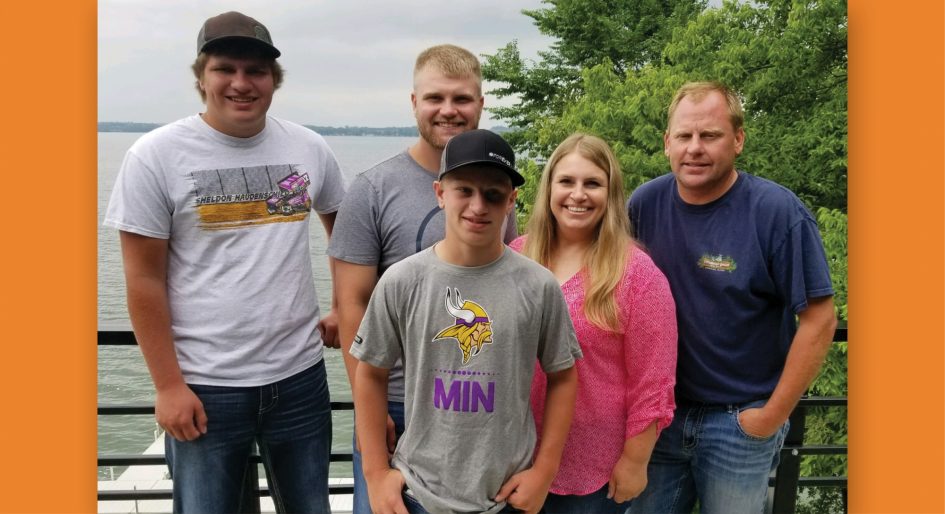 That dirty “c” word can be a family’s worst nightmare, but what happens when it comes back more than once or affects both of your parents? One Howard High School freshman has experienced both of these circumstances and continues to step up to cancer with his family.

Karsten Hamilton, the youngest of three boys, wasn’t even born yet when the Hamilton family first endured cancer. His father, Troy, was the first in his family to be diagnosed with kidney cancer in January 2005 and had his kidney removed one week before Karsten was born. Then, seven years ago, Karsten’s mother, Dawn, was diagnosed with breast cancer. Only seven years old at the time, Karsten didn’t quite understand how serious that diagnosis was and the impact it would have on their family.

Farmers near Carthage, Karsten describes his parents as diligent, hard-working people. “My mom is very tough and my dad just kept us going through everything,” said Karsten. Dawn is also employed as the Administrative Manager for Balance Point Technologies in Carthage.

Like her husband had years earlier, Dawn overcame her battle with cancer. She went through a lumpectomy and six weeks of radiation, before being cleared of cancer. Unfortunately, cancer had a different plan for her, when her and her family learned the agonizing news a year ago – her cancer had returned.

This diagnosis was a lot different for Karsten, being older and having a better understanding of what it meant. “I remember my brother and I were sitting in the kitchen and my mom was acting differently. I asked what was wrong; when she told me, she just said ‘and we’re going to get through it again’.”

Following her diagnosis, Dawn had a partial right mastectomy, a hysterectomy, and reconstructive surgery (three separate surgeries) and follow-up visits. During that time, Karsten’s grandmother and aunts were very influential in providing support to their family. “My grandma would take her to appointments, come to check how we were, and clean the house,” said Karsten. “My aunts would also make a bunch of food to make things easier on us.”

Cancer also shifted the roles the Hamilton kids were used to playing in their family. “We had to do a lot of stuff on our own that we were used to our mom doing, that we never thought about,” said Karsten. “We washed the dishes, did the laundry, and tried to help her by getting the stuff she needed.”

Today, Dawn has once again received a clean bill of health and overcame her latest battle with cancer, which her son continues to be grateful for. “She is just always fun and organized,” said Karsten. “I like to mow with her and run our mowing business together.”

As an active student in football, wrestling, track, and trapshooting, Karsten appreciates that his mom is still able to cheer him on and follow his activities. “She always goes to my stuff and is a good supporter in everything I do.” As the Howard High School students join together for the third year to raise money and awareness through “Tigers Step Up 2 Cancer”, Karsten is just one of the many students who have experienced the wrath of cancer first hand and understands the importance of coming together as a community to support those fighting this disease.