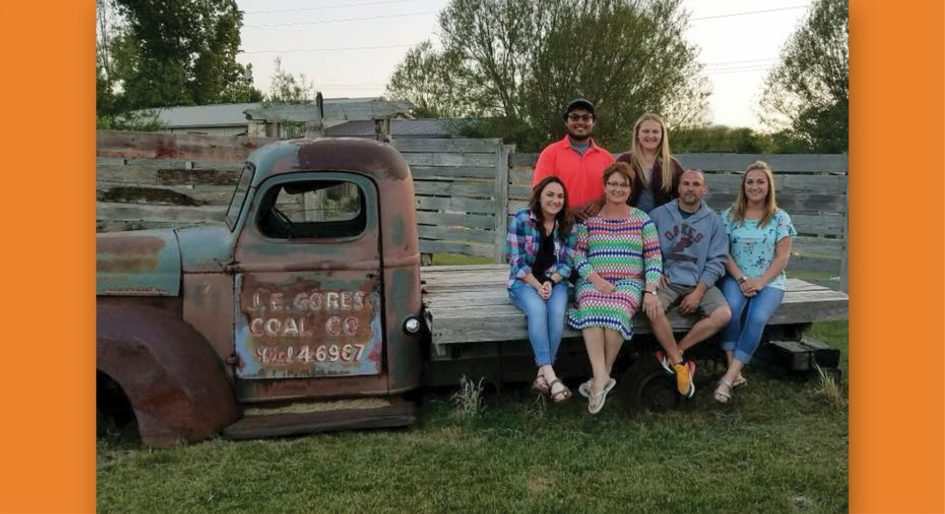 The youngest two children in their family, Adyson and Mia Glanzer have always known their father as a hardworking, energetic man, who never missed a beat when it came to their lives and activities. However, last year, the Glanzer family quickly found out that life can change in the blink of an eye, especially when it comes to a cancer diagnosis.

A father of four and an area business owner, Todd Glanzer is someone who most people are used to seeing on the go; whether it be at one of his children’s activities, serving people at Animal’s Bar and Grill or the Howard Cold Storage, or leading the town of Canova as Mayor. However, cancer had a different plan in July 2018.

Todd’s journey started with a small lump similar to the size of a bug bite, but under the skin about two weeks before his oldest daughter was set to graduate. At first, he didn’t think much of it, but over the next few months the small lump quickly grew. By the time Todd went in for surgery to remove the growth on July 17th, 2018, it had turned into a lump nearly the size of a golf ball on his neck. After surgery to remove the tumor, he received the news that the cells were active around the tumor and was diagnosed with Stage 2 Mucoepidermoid Carcinoma (a type of cancer of the salivary glands).

Following the diagnosis, the doctors put a port in for 2-3 weeks until Todd could start treatment. Once he started treatment, he did 7 weeks of chemotherapy (once a week) and 33 weeks of radiation (five days a week) in Sioux Falls. During treatment, Todd became very sick, unable to eat and eventually needing a feeding tube.

“It was really hard to see him go through that,” said Adyson, a Senior at Howard High School. “He didn’t talk much, he looked different, and he just wasn’t himself.”

47 years old at the time of his diagnosis, Todd’s youngest daughter Mia describes him as having a heart of gold, with the personality of a kid-at-heart. “We’re very close to him. He’s always there for us and supports us in anything we do. You would never imagine this could happen to someone so active.”

Todd continued to work as long as possible, until his illness would not allow him to. What can only be seen as a stressful time, the Glanzer family found themselves surrounded by blessings from their family, friends, and business family at Animal’s in Canova.

“So many people offered to help us with whatever we needed,” said Adyson.

As they rallied around their husband and father, both girls referenced how their father’s cancer journey strengthened their family’s relationships with each other. “We shared a lot of tears with each other,” said Adyson. Adyson and Mia are also fond of how remarkable their mother, Brenda, and older siblings, Kiara and Isaiah, were throughout the treatment. “Our older sister Kiara is a nursing student at SDSU,” said Adyson. “It was amazing to see her work with him and how she could make him eat and get him to do what she wanted.”

“We would’ve been lost without Kiara,” added Mia. “She even knew how to flush the feeding tube. Isaiah also stepped up to play dad to us, even though he wasn’t living here.” The girls also credit their extended family including aunts, uncles, and cousins for their support throughout the cancer battle.

In October 2018, friends and family showed their support for the Glanzers at a benefit in Canova. “It was amazing,” said Adyson. “I didn’t think so many people would be there. There were people from Mitchell, Rapid City, all over.”

“It was breathtaking walking in there and to see that many people make that much of an effort for us,” added Mia.

Even while going through trying times, Todd still managed to show his children his support. “He only missed two of our volleyball games,” said Adyson. “He was determined he was not going to let cancer make him miss our sports.”

“And he still made sure to critique us afterwards,” joked Mia.

Following radiation, Todd had to wait three months to let the area around his tumor heal. In January this year, the family went in for his appointment to discover the scans showed he was in remission.

“It’s just crazy to think one lump could lead to that,” said Adyson. “I’m very proud of how he fought for us.”

This summer, the girls have enjoyed getting back to enjoying their favorite things with their father, golfing and 4-wheeling, and are looking forward to having him healthy for this year’s hunting season. “He’s just our number one supporter,” said Mia.

2018 was not an easy year for the Glanzer family, but it has taught them many valuable lessons in life. “I would encourage families to always be there for one another,” said Adyson. “You never know when something can happen.”

As the Howard High School students join together for the third year to raise money and awareness through “Tigers Step Up 2 Cancer”, Adyson and Mia are just two of the many students who have experienced the wrath of cancer first hand and understand the importance of coming together as a community to support those fighting this disease.