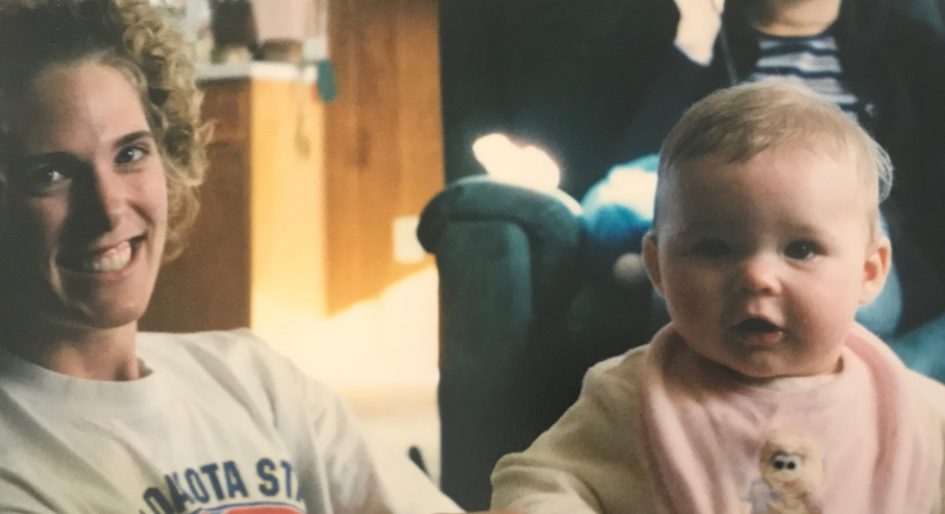 With a smile that could light up the room and a bright personality, Stephanie Williams would have been 42 years old in April, but cancer had other plans. Forever 37, Stephanie was a loving mother, sister, and aunt, whose memory will live on forever with one De Smet High School senior.

Codi Schmidt was a 6th grader when she found out her aunt, Stephanie, had been diagnosed with a cancerous brain tumor. Stephanie, an Arlington native, was having issues with double vision in June 2012 and went to see a doctor. In November 2012, she was diagnosed with a brain tumor on her brain stem that was inoperable. Codi can recall seeing her mom hugging her dad, crying, when her and her younger siblings learned of the diagnosis. “We were young and didn’t understand how serious cancer was or what it could do at the time,” said Codi.

A former rodeo star at SDSU, Stephanie lived on a ranch with her husband and two young children (ages 11 and 7) at the time of her diagnosis. She was a teacher for over ten years in the Wall School District and a volleyball coach, before joining her husband on the ranch. “She was the kind of aunt who spoiled you,” said Codi. “She was always smiling and peppy. She had the best, biggest smile and bright blue eyes.”

Stephanie began radiation in Sioux Falls soon after her diagnosis. She also had to take steroids, which left her swollen and she began to lose her hair. While receiving treatment, she had a stroke in the hospital and passed away in April 2013. “It was hard to see her start to fade away,” said Codi. “My mom picked me up from school and told me the news. Her funeral was the first one I had ever attended.”

Today, Stephanie’s memory continues to live on through her family, especially her nieces, Codi and Camryn (Codi’s younger sister). “My sister Camryn is carrying on the rodeo tradition and wears Stephanie’s belt when she’s out roping. My grandpa coaches her just like he used to coach Stephanie (his daughter).”

This year, when De Smet High School students decided to host their first ever “Bulldogs Bark Back @ Cancer”, Codi has been one of the three students leading the efforts, with her aunt’s legacy on her mind. “I felt like this was a good opportunity to help other families. When someone in this area is diagnosed with cancer, they have to drive to get treatment and it can be a huge financial burden on their family. It feels good to help and I hope for better outcomes than what my family has faced.”

“I wish I could just give her one more hug,” said Codi. “She continues to inspire me every day.”

As the De Smet High School students join together to raise money and awareness through “Bulldogs Bark Back @ Cancer”, Codi is just one of the many students who has experienced the wrath of cancer first hand and understands the importance of coming together as a community to support those fighting this disease. Codi has chosen to step up and share her story and give advice to others who may be going through the same battle. “Never give up hope. Time helps and it’s great to talk about her now and share our memories.”